California is facing some interesting hurdles right now, even outside of the recent wave 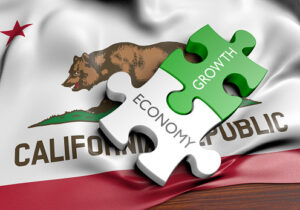 3D render of two puzzles pieces with the words “economy” and “growth” lying on top of the flag of California.

of COVID-19 and threat of forest fires. Rising commercial office space vacancies, small businesses closing down, and record unemployment and poverty numbers are, however, facing every state in the Union.

The uniqueness of California comes from its position to recover from the economic fallout. As one of the largest economies in the world, California has the tools, population and culture to rebound quickly and thoroughly.

Property values have remained high, even continuing to increase in suburbs and areas outside of the city centers. California’s state government is less partisan and more willing than our federal government to implement programs to help small businesses and the unemployed weather shutdowns. Most importantly the educational resources and cultural interplay between higher education and implementation via tech (among others) companies still remains strong and a major draw for the ambitious from all over the world.

Trying to sketch the long-term effect 2020 and all it has brought with it is fruitless while pandemic deaths continue to increase. California, however, is positioned just as you would expect the country’s largest economy to be.