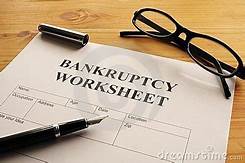 When we talk of asset protection, many think of bankruptcy.  But there is a social norm with this type of word preventing many from considering it seriously.  The truth is that many very wealthy individuals in our country are not so dissuaded and utilize filing for bankruptcy as a means to preserve wealth.

For example, one entrepreneur went through bankruptcy four times in his life and left a legacy including a private foundation.  For others it means wiping the slate clean to rebuild their wealth.

Historically speaking bankruptcy was a way to depart from the English precedent of jailing a person for their debts. Remember the ‘Debtors’ Prison’ in the novels of Charles Dickens?

Bankruptcy then became a tradition of habit to give Americans a fresh start while balancing the needs and interests of the corporate investors.

Because more individuals file for bankruptcy they often use chapter 11. Yet because Chapter 11 is so expensive and can get complicated, they seek to file under Chapter 13. This type of filing looks like a blend of the typical chapter 13 debtor and a small business because the individual has greater assets, debts, income and expenses, and the majority of individuals are operating some type of business.

You may wonder what the difference is.

Chapter 7 allows mostly individuals to wipe the slate clean.  A court appointed administrator is empowered to sell debtor’s assets.  The laws allow the debtor to keep some of these like a house and clothing.  The trustee pays creditors though not all are paid meaning those debts are forgiven, hence the idea of the clean slate.

Chapter 11 & 13 are for individuals and companies. Not everyone will qualify for this type of bankruptcy.  The basic difference is the amount of money owed.  Folks will need to make enough money to prove they can payback their debts considering the restructuring. Traditionally these can take three to five years to payback.

Chapter 11 allows a business to continue to operate during the reorganization process.

Of the things to consider are timing and the means test. ‘The Mean Test’ as it is referred to determines which type of bankruptcy you qualify for. It was designed to limit the use of Chapter 7 bankruptcy to those who can’t pay their debts. It does this by deducting specific monthly expenses from your “current monthly income.” (Another way of saying that is to say your average income over the six calendar months before you file for bankruptcy) to arrive at your monthly “disposable income.”

Some refuse to consider bankruptcy because of the myth that it kills your credit.  What folks don’t usually know is that while filing for bankruptcy may stall some investments, some will vouch for the fact that client’s credit improves after filing, sometimes even immediately.

1 thought on “Beginner’s Guide to Bankruptcy”